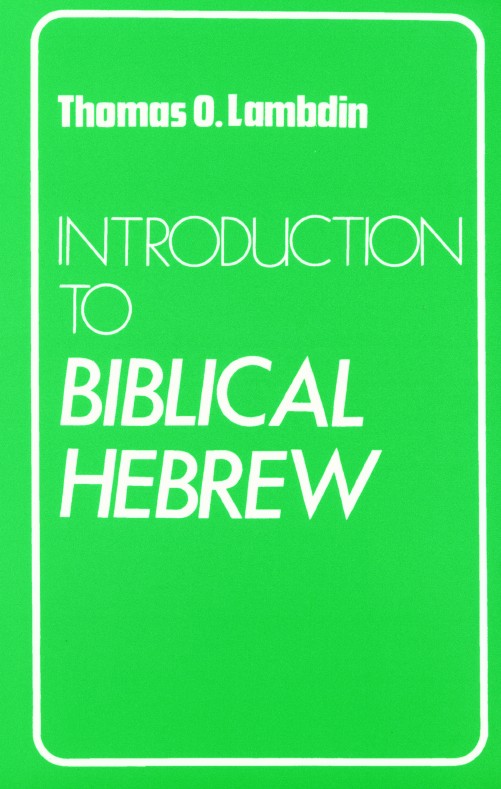 'Professor Lambdin spent ten years perfecting this book ... the book was worth ten years waiting for. Systematic, clear with all inessentials pruned, it presents Biblical Hebrew in depth and, of course, is first-rate preparation for anyone who wants to gain more than a superficial knowledge of modern Hebrew ... there simply is no substitute for books like Professor Lambdin's.'

This book is designed to cover one year's work in Hebrew leading up to a full understanding of the language. It has been used by the author with his students for many years and the published text is the result of testing and refining over these years.

Every attempt has been made to make the grammar clear and simple. For example, all Hebrew words are transliterated, as well as being given in the original for the first three-quarters of the book. The grammatical discussion is made as unsophisticated as possible for it is the author's intention that this book should also be of use to those who study Hebrew without a teacher.

Thomas O. Lambdin is one of the leading scholars of the Semitic and Egyptian languages. He was appointed as an associate professor of Semitic Languages at Harvard University in 1964. He retired from Harvard in 1983 and is Professor Emeritus. He was admired not only for his research and his "tireless teaching", but for the quality of his introductory textbooks on Biblical Hebrew, Coptic, Ge'ez and Gothic language.
ISBNs: 9780232513691 978-0-232-51369-1 Title: introduction to biblical hebrew
Subscribe to the DLT mailing list