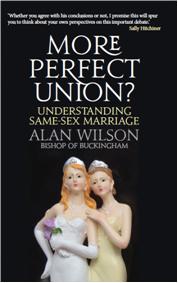 ‘Alan Wilson is the only bishop in the Church of England who speaks for the full inclusion of LGBTQI people in the Church. In this powerful statement, he sets out the scientific, theological and Biblical reasons which have led him to believe that this is the truly Christian option.’

‘An extraordinarily valuable contribution to the quest for an open and honest conversation around an issue that the Church can no longer sweep under the ecclesiastical carpet.’

‘The joy of this book is a bishop telling the truth, not least about the way the gay issue has been handled in recent history, and the awful dishonesties in which we are now entrammelled as a result.’

In this important and timely book Alan Wilson argues that allowing gay people to marry is a moral purpose.

Wilson says: ‘I asked myself “what does God want for gay people?”. After re-revisiting the Bible, and more importantly getting to know gay people of all types and varying backgrounds, he decided the answer was that God wants for them the same as everyone else – flourishing faith, hope and love, involvement and inclusion.

Meanwhile, from a scientific perspective, More Perfect Union? asserts that homosexuality is part of a wide range of human sexual longing and expression, not an anomaly, a sickness, not merely a lifestyle choice.

The vast majority of people Wilson encountered on his journey toward being in favour of same-sex marriage were not anti-gay, were ‘just trying to love their neighbour as themselves’, even if, in some cases, their heads lagged behind their hearts on the issue of gay marriage.

The ultimate aim of this book is to help Christians unite head and heart in a fully positive response to gay people marrying, and to enable them to wholeheartedly rejoice in such union, in doing so shaking off the hangover of years of stereotyping, fear and discrimination about gay people.